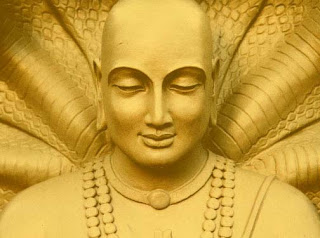 The Yogasûtra, thread of freedom


about the full awereness


Two translations: one from sri Hans yoganand, the master of the original yoga, the other from James Haughton Woods (1864-1935) played a fundamental role in making the professional study of Asia a possibility at Harvard.

Now the teaching of the freedom. (or rest)

Now the exposition of yoga.
(is to be made)


The Freedom ( or the rest)
Is the indifference to the activities of the mind.

Yoga is the restriction
Of the fluctuations of mind-stuff.


Through this, the practicer settles
In the peace of his essential nature.

Then the Seer (that is, the Self) abides in himself.


Otherwise the practicer identify himself with the fluctuations.

At other times it (the Self) takes the same form as the fluctuations
(of mind-stuff).


These fluctuations are of five sorts, distressing and not distressing.

The fluctuations are of five kinds and are hindered or unhindered.

Which are the means of the knowledge, the ignorance,
The interpretation, the contemplation
Without caesura and the memory.


The direct perception, the deduction
And the testimony are the means of the Knowledge.


The illusion comes from a false perception of the reality.

The concepts are the product of a verbal knowledge
Exempt from reality.

The predicate-relation (vikalpa) is without any
(corresponding perceptible) objet
And follows as a result of perception or of words.


The non-existence* leads
to the perfect communion

*state where the thought, the concepts, the mind don’t intervene any more and where the peaceful vacuity, the bliss

Sleep is a fluctuation of (mind-stuff) supported by thge cause
Of the (transient) negation (of the waking and the dreaming fluctuations.


The memory is the print left by the experience.

Memory is not-adding-surreptitiously to a once experienced object.


The Observance of the Agya*, the detachment calm the mind.

*Sadhàna of the original yoga.

The restriction of them is by (means) of practice and passionlessness.


The Observance is assiduous and continuous.

Practice is (repeated) exertion to the end that (the mindstuff)
Shall have permanence in this (restricted state).


The constant and enthusiastic Observance gives robust foundations
To the control of the mind.

But this (practice) becomes confirmed
When it has been cultivated for a long time
And uninterruptedly and with ernest attention.

Thanks to the detachment, you don’t desire any more
The objects you know or you heard about they exist.

Passionlessness is the consciousness
Of being master on the part of one
Who has rid himself of thirst for either seen
or revealed objects.


The contemplation over the true-self gives the true detachment.

This (passionlessness) is highest
When discernment of the Self results in thirstlessness
for qualities (and not merely for objects).

(Concentration becomes) conscious (of its object)
By assuming forms either of deliberation (upon coarse objects)
Or of reflection upon subtile objects or of joy
Or of the feeling-of-personality.


At the highest level of the meditation,
when the mind is under control with detachment,
there is still a residue of impressions.

The orher (concentration which is not conscious of objects)
Consistes of subliminalimpressions only (after objects have merged),
And follows upon that practice which effects
The cessation (of fluctuations).

(Concentration not conscious of objects) caused by worldly (means)
Is the one to which the discarnate attain
And to which those (whose bodies) are resolved
Into primary-matter attain.


The samadhi comes after the faith, the courage,
The memory and gives a high perception of the truth.

(Concentration not conscious of objects) which follows upon belief
(and) energy (and)mindfulness (and) concentration (and) insight,
Is that to which the others (the yogins) attain.


They attain it those who have an intense desire of Liberation.

For the keenly intense, (concentration) is near.


The intensity of the Observance makes the difference

Because (the keenness) is gentle or moderate or keen,
There is a (concentration) superior even to this (near kind).

Only total free fall in God brings to the Kingdom.

Or (concentration) is attained by devotion to the îsvara.

God is different from the human being :
He is not affected by the causes of the sadness
Nor by the law of the action-reaction
No more than by the confusion of the mind.

Untouched by hindrances or karmas or fruition or by latent-deposits,
The îsvara is a special kind of Self.

God is the supreme Knowledge there is nothing beyond.

In this (îsvara) the germ of the omniscient is at its utmost excellence.

Beyond time he is the supreme guru, the one of the first masters.

Teacher of the Primal (sages) also, forasmuch as (with Him)
There is no limitation by time.

His Name is the primordial-sound.

Repetition of it and reflection upon ist meaning (should be made).

Consequently, the obstacles disapear
and the full Conscience comes up.

Therafter comes the right-knowledge of him who thinks in an inverse way,
And the removal of obstacles.

The obstacles are the disease the inertia the doubts
The carelessness the tiredness the indiscipline
The imagination the lack of perseverance the step backward
The fluctuations of the mind.

These absent-mindedness can stop the practice
And pull sorrow despair agitation loss of the breath.

Pain and despondency and unsteadiness of the body
And inspiration and expiration
Are the accompaniments of the distractions.

The Observance of the Agya* keep you out of these things.

*The Sadhàna of the original yoga.

To check them (let there be) practice upon a single entity.

You can keep the spirit in peace by the following behaviors :
Towards happy people practise the friendship
The unfortunates, the condolence, the virtuous ones the gaiety
Of those who act badly, the indifference.

By the cultivation of friendliness towards happiness,
And compassion towards pain, and joy towards merit,
And indifference towards demerit.

You can also arrive at this peace by the Meditation on the breath.

Or (the yogin attains the undisturbed calm of the mind-stuff)
By expulsion and retention of breath.

Continuing this Meditation in the actions
Helps to stabilize this Peace.

Or (he gains stability when) a sense-activity arises
Connected with an object (and) bringing the central-organ
Into a relation of stability.

You can also meditate on the peaceful Inner-Light

Or an undistressed (and) luminous (sense-activity
When arisen brings the centralorgan into a relation of stability).

You can also release your mind of all attachments
Any desires and passions*.

*This verse is ironic, as both following ones. It is easy to say that it is necessary to release your mind of any attachment, desires and passions ! But without these techniques of Meditation and the S\dhana or Agya, how can it be done ? By reading the next two verses you will understand what is ironic there.

Or the mind-stuff (reaches the stable state)
By having as its object (a mind-stuff) freed from passion.

You can also look for the Knowledge in the dreams*.

*You see the irony ! The dreams have of course nothing to do with this spiritual practice, they can at the very most help for a therapy involving the psyche, the affect but they don’t enter in the Agya. The verses 1.37, 1.38 and 1.39 are ironic, the writers of the book had without doubts a sense of humour.

Or (the mind-stuff reaches the stable state)
By having as the supporting-object a perception in dream or in sleep.

Or (the mind-stuff reaches the stables state)
By contemplation upon any such an object as is desired.

His mastery extends from the smallest atom to the greatest magitude.

As the pure crystal takes the color of objects placed near to it
The meditator free of the mind's fluctuations leaves the confusion
And reached the perfect Conscience of the bliss
Absorbed in One.

(The mind-stuff) from which, as from a precious gem,
Fluctuations have dwindled away, reaches the balanced-state,
Which in the case of the knower or of the processof-knowing
Or of the object-to-be-known, is in the state of resting upon (one)
Of these (three) and in the state of being tinged by (one) of these (three).

At this stage, the object and the knowledge
Merge to become the Knowledge.

When the mind is without thought, without memories
Nor conscience of itself, then there is the bliss.

When the memory is quite purified, (that balanced-state)
(into conscious knowledge) as the intended-object and nothing more -
Is super deliberative.

It happens the same thing in the both following stages of meditation
Whether with or without fluctuations of the mind
Conscience of the illusory identity and of space-time.

Yoganand
The point where peaks this process of meditation is the Unit,
The vacuity, satçitananda, the All.

The stages of meditation described up to here are said « with seed* ».

*These states of conscience, these meditations are so called because they are the result of a diligent practice which progresses step by step. They are not spontaneous fruits of the Grace. The seeds are the efforts, the acts, the Observance which we sowed and which gave their fruits.

These same (balanced-states) are the seeded concentration.

The Conscience of the bliss without thoughts nor distinctions
Being acquired appears the Light of The Supreme-Being.

When there is the clearness of the super-reflective
(balanced-state, the yogin gains) internal undisturbed calm.

At this stage, the Knowledge becomes plenitude of the Truth.

In this (concentrated mind-stuff) the insight is truth-bearing.

This Knowledge has nothing to do with
The bookish knowledge stemming from readings or from learnings.

Has another object than the resulting from things heard or from inferences,
Inasmuch as its intended-object is a particular.

The effect of this Knowledge sweeps
All the residues of the mind.

When this state settles down, there is ecstasy
Without any other medium than the ecstasy.

When this (subliminal-impression) also is restricted, since all is restricte,
(the yogin gains) seedless concentration.