The path of devotion 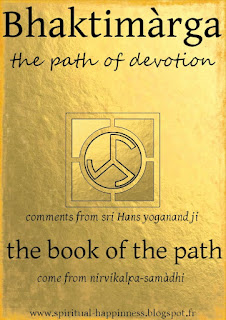 The path [the path of freedom] is a way of life, a practice which makes it possible to achieve the purpose of its life. When one is a regular churchgoer or Walker, and that one reads the Holy-books such as Bhagavad-Gîtà, Tao Te King, Bhaktimàrga, Gospels - apocryphal books also - Guru Granth Sahib, one finds the prints of the path there, one recognizes teaching, the practice there.

For the one that does not go on this path it is not obvious, but for the one who practises this mystic, these prints are absolutely obvious and do not leave any doubt about the complete identity of this perfect likeness, beyond the languages and of the historical contexts particular to each country of origin.

The specialists in yoga know the different components of Trimàrga - path towards the liberation - these three yoga are: jnana-yoga, karma-yoga and bhakti-yoga, but the majority do not know the path which, for us, is however former of them and inspired them.

Each of these three yoga has an asceticism which proposes to bring the yogi to the liberation. The path stands on three feet: The Agya. This base gathers practices which inspired the three asceticisms of Trimàrga. It is necessary to add to these three yogas of Trimàrga, the raja-yoga describes in yoga-sûtras, where we recognize our path. However raja-yoga, as it is currently practised, is not our practice also the path does not name it raja-yoga but the path.

According to our teaching, the path is older than the Hinduism that it inspired, even if the name of the path is recent and given because of this difference, evoked before, with raja-yoga as now practised. If not, it would have be named raja-yoga, but it would have been necessary to add: truth or channel-history. You understand what these names would have had of comical. One found traces, of our practice, on iconographies, potteries, going back to five thousend years before our era, in the archaeological excavations of Mohenjo daro, on the edges of Indus, in Pakistan.

For certain archaeologists this largely remains to be shown. For them the found traces would prove, at most, that at that time, in this civilisation, yoga was practised. For an enlightened the postures and the symbols which surround them say, without doubt, that in this civilisation of Indus one practised the original-yoga and one followed its Agya.

When one sees, on a pottery, a man sitting in Lotus on a high base, put on three feet one cannot prevent oneself from thinking of Agya, base of the path, on which the practice of the Walker rests. Agya has also three feet. Completion of this civilisation and the beginning dates of the Hinduism correspond perfectly and the Aryan ones, on the way towards the North of India, bringing with them the sanskrit, brought also a teaching learned in the Cashmere near the “survivors” from the civilisation coldly disappeared because of rather brutal climatic incidents.

The Religions are, for us, what remains when the carrier of the message is not any more. Then remains only the message and as the living word was shut, the human beings transform the message of origin along the years. The transmissions being often made through the buzz marketing, before being written, you imagine the distortions of the message of origin. For this reason the path may be only with a living spiritual guide. A chapter of the book is devoted on the subject of a living guide.

Facts are magnified, told by the religions and become legends full with top-facts, miracles and take care of sociocultural, historical considerations and policies that hide the pearls of the truth in the middle of a white stone heap.

You will notice that certain Verses of the book take again parts of other books, like Tao-Te-King or certain Gospels or other Holy-books. It is a purposely fact : the book is related with these works from that it takes again - very rarely - certain shorts parts which correspond, in all points, with its teaching.

The most important is the message, not the writer and translator, that is the reason why they are not mentionned.

1-1-7
It is the container and the content the water of the river and its bed
It is the wind, the sky and the bird it is the vacuum and the fullness