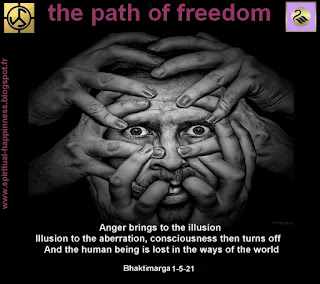 "The good leads to One and opens its Kingdom,
The evil brings back towards the desires of the world
And the suffering of confusion"

"Anger brings to the illusion; illusion to the aberration,
Consciousness then turns off
And the human being is lost in the ways of the world "

In the texts of the path, in the Satsang it is often question of the confusion. Obviously this word possesses several meanings depending on whether you are a jurist, a grammarian, a psychologist, a politician or a psychiatrist. If you give to this word the semantic load of the jurist, by speaking about the mood of an individual, you will understand nothing in its problem.

As regards to the original-yoga it is the same thing: we use the word confusion, vague to express something concerning the spirituality. If you read dictionaries, they will tell you, about the confusion:

-"Action to confuse, to take something or somebody, for something, somebody else, error, despised."
-"State of what is confused, unclear, disordered, disorder."
-"Situation of a group where everybody stirs in a muddled way."
-"Embarrassment, confusion caused by the feeling of a fault; embarrassment, shame."
-"Defect of order, method, clarity in the things of the spirit."

In medicine the confusion indicates a disorder of the attention and the perception of the outer facts. On the path we use this word to say the state of conscience where is a person completely under the influence of the false-ego.

Obviously, if you do not know exactly what is the "false-ego" the explanation doesn’t enlighten you. There are texts, on the blog which speak about the false-ego, but I am not sure that you will go to read them before returning to this text, also I am going to restore you an explanation, short, of what we understand by "false-ego".

The false-ego is that, usually, most of people indicate by the word ego. For us the ego is not a problem, quite the opposite: it was given us so that our soul is aware of itself: without the ego the soul could not be considered as individuality, could not say «I». Moreover, the ego is what gives it the free-will and the free-will is one of the fundamental characteristics of the humanity. The free-will is the first condition of the prodigal son’s returning back at his father's house. The ego, according to our doctrine, is attached to the soul during all the time of the incarnation, forming what we name "incarnated-soul" or "Witness". 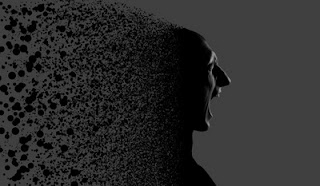 To simplify extremely we could say that the false-ego is the vanity, in every sense of the word. Every medal has its lapel and the false-ego is the lapel of the ego and the free-will, as the darkness are the other face of the Light. It is this bipolarity which generates the life. The Hindus decompose the supreme God, One or Brahman in three poles, the Trimùrti, the creator, the protector and the destroyer, that is Brahma, Vishnou and Shiva.

Thus, for us, the confusion
is the state of consciousness where is the one
who has put its attention completely on the that,
the visible, the two-tier, and which mind is managed by the false-ego.
In the Yogasutra of Patanjali this confusion
is the fluctuations of the mind or Vrittis.

In a confuse person the reality is seen through the warping veils of the sensibility, concepts , preconceived ideas, doubts and fears. You saw, higher, what dictionaries said, about the confusion:

" Action to confuse, to take something or somebody, for something, somebody else; error ". It is indeed the case. When we take our thoughts for an inspiration coming from God, or the ego for the false-ego there is a mistake, we confuse, we mix-up things.

You also saw this definition:

" State of what is confused, unclear, disordered; disorder ". I assure you that the one who begins to tidy up the head, by the practice of the Meditation and, for those who had the Revelation of the four techniques and who observe the Agya, this one, thus, begins to realize that there is a big disorder in the head. Well, realizing that is already to begin to remedy it, especially with the Agya we have the tool, the method to reach it, to tidy up the mental sound. Even if it is not the purpose of the Observance, that helps ! 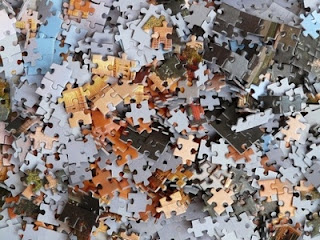 The definitions also say that the confusion is...

" Situation of a group where everybody stirs in a muddled way. " Is not it a faithful description of the humanity there? When 15 % of the humanity are divided 80 % of the wealth, is not it a proof of certain disorder there? Without counting the wars, obviously!

"Embarrassment, disorder caused by the feeling of a clumsiness, a fault; embarrassment, shame". The clumsiness and the fault are obvious, known and that a lot of people feels in a certain embarrassment, disorder is not surprising: there is something, in each human being, that knows very well that it is bad what they are doing to themselves and to the world: the soul. Even dominated by a mind under control of the false-ego, the soul remembers the perfection where it comes from and the comparison with the confusion doesn’t let to hamper it, to cause in it a certain disorder.

" What conceives well expresses itself clearly and the words to say it arrive easily " [the Art of poetry (on 1674) Nicolas Boileau-Despréaux] we have to admit that things are not conceived well by the humanity. The global warming and the deforestation, the daily loss of biodiversities, the injustice reigning over the world, the cruelty to the weakest and the cynicism of the financiers of all stripes prove us, if proof were needed, that things are not conceived well, in the human mind and that the words, to say it, don’t come easily !

It is to say the confusion in which the world is. When I write the world I imply the world of the human beings, that is the human beings themselves… but what is going wrong in him ? That he isn’t in the consciousness of the harmony which presides over the Creation.

One is harmony and his harmony reigns over His Creation, parts of Him. The human being is the only living being who has the free-will. This free-will was given to him By One [" and God created the man and the woman in his image " (Genesis 1:27)] so that he returns to Him in full awareness.

If the free-will gives to the human being the power to tell yes to the divine harmony, the deep Consciousness, it also gives him that to say no to it and to take the easy way of the immediate appearances and pleasures without responsibilities. It is necessary to admit that often he chooses to say no to it. 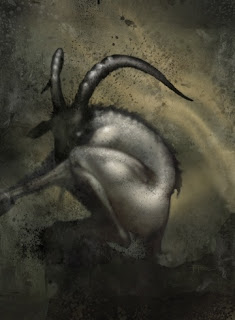 There is something,
in the human being,
who prefers the disharmony
and this thing
is the false-ego.


The false-ego is the devil, - that which separates, we have to admit that the devil has the hand put on the world of the men. But if the devil is infinitely more powerful than the human consciousnesses, it is less strong that God, little, less strong one degree but this degree makes the difference between very powerful and infinitely powerful.

The Manicheanism of Mani, at about three hundred years AD, described well this fight of the good and the evil. It should be noted that this doctrine was born in the mystic heart of the world.

If you want to be of the good side of the Strength [master Ioda dixit] you have to take sides. It took a lot of incarnations before the human being decides to take sides ! When you will have decided, it will be necessary to make what is good to be on the side of the Light. We propose you a method: the Agya and the Revelation . It is necessary to ask for it, that won’t happen en its own.