Origins of the religion and yoga 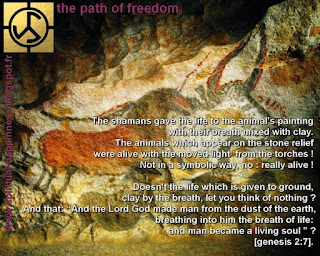 
The action took place for sixteen times thousend years, in the Paleolithic superior and implies the homo-sapiens, an hunter-gatherer living in family groups and making use of tools and weapons of cut stone and bones. Dressed in animal skins, he lived in small regroupings of huts.

The prehistoric man had a very strong religious feeling and his animist spirituality, that means believing in the existence of a soul, of a holy vital force animating all the living beings as well as the objects and the natural forces like the wind, the sun, the stones and the water.

Since a while already [app. 200 000 years]
the humans tamed fire and cooked his food
which require sixteen times less energy
for the digestion by the intestines.
The enteric brain had therefore less effort to make
and relocated the work of thinking
for what was not digestion.
The brain «at the top» the one situated in the cranial cavity
doubled in size since the begining of fire taming.
This «top» brain could think to something else other than the food.
This new paradigm of two brains
has make the spirituality to find
favorate factors to its development.


The group of men and women of which it is question here live in a semi-nomadic way according to the food resources and the game through the seasons. Its place of residence was a place in the South of France which, at that time, consisted of taiga, kind of medium marshy and traversed forests of coniferous tree. The animal settlement was bisons, horses, mammoths, bear of the caves, woolly rhinoceros, hyenas and saïga [an antelope]. More in the North, at that time, was the tundra. 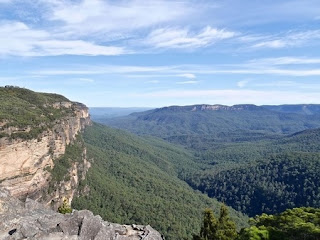 
In this medium less inhospitable than in the North of the Loire (France), they were very undulating eras, basic mountain with massive limestones. Rivers ran along the bottom of the valleys which they had dug. In these sheltered valleys with a softer microclimate than on the top-plates and the plains, the leafy trees like the oak grew and the water of the rivers gave drinking water and fishes. Also the huts of our homo-sapiens were installed on their high banks, safe from sudden rises of the level of water.

These camps, which lasted during the long months of the cold season, liked to be held close to sheltered and deep caves dug by nature in limestone to the high reliefs to the steepsided valleys. These caves were not used as dwelling, the humans feared to remain in this darkness, full with mystery, no : they were used as place of animist cult and refuge in the event of exceptional climatic events or pressing danger as the castle of the Middle Ages received the villagers who lived in the neighbourhoods.

These vast caves were like cathedrals. Usually only certain members of the clans penetrated there and officiated there. They was kinds of Shamans at the same time priests and artists. They painted the walls of certain caves known as Lascaux and Chauvet. For them, animists, the rock of the cave had a soul, like the animals they painted.

They made use of the reliefs of the walls, of the forms which the stones drew already, suggested, to paint here a horse, there a auroch, elsewhere an antelope.

At the bottom of the cave it was dark,
the painters lit torches of coniferous tree
and with their wavering light they painted these animals.
But before they were put in condition.
Thanks to psycho-active substances,
mushrooms, marijuana, resin or animal venom,
they went into a transe.
Then they prepared their color pigments
made of clay, finely crushed
and of ash, charcoal. 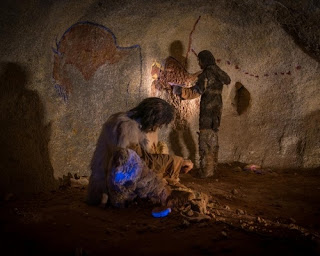 The Shamans put a kind of clay pulp in the mouth and project it, while spitting, on the wall of the cave. They don’t spit as one spit to get rid of a cumbersome mucus, no : they fill up their lungs and strongly splutter by small fast expiries and following one another quickly, like a jerked aerographer. Then the shoulder of animals appears, then its back, the thigh finally and soon an auroch is alive there.

Imagine this Shaman in a state of transe,
at the bottom of this deep and obscure cave
lighted by torches of resinous branches…
the animals which appear on the stone relief were alive !
Not in a symbolic way, no : really alive !

Don't forget the belief of the animists who say that the beings and the things, fires, the stone are endowed with a soul… and these animals which appear thanks to their breath and with the coloured clay, these animals which have relief and which seem to be driven… they are alive!


Doesn't the life which is given to ground, clay by the breath, let you think of nothing ? And that: “And the Lord God made man from the dust of the clay, breathing into him the breath of life: and man became a living soul. ”? [genesis 2:7].

The origin of yoga I can make it go back to at least 8000 years,
in the upper Paleolithic era,
because of the excavations of the city of Mohenjo-Daro
in the british India of the Twenties,
but I would not be astonished that the beginning of the history of
the pràna and the prànàyàma, of yoga takes its source there:
in the upper paleolithic between 17 and 12,000 years
with these Shamans in a state of trance
who gave the life thanks to their breath.


By paint thus they inevitably realized that the breath thus used, with reserve and “discipline”, got a feeling of drunkenness amplified by the chewed plants or absorbed “sacred” mushrooms. Some shivaïsts make this, still currently, with the smoking of ganja and shamans, everywhere in the world, make thus with other substances.

Here the origin of the religiosity and the first steps of the yoga which would have improved since these ages of the beginnings.