The Truth about the devil

It is proposed you here to know the truth about the devil ! Incredible, not ? By reading it you will have a clear point of view and without religious dogmas concerning the malignant, the evil, the that-which-separates. Then? Does the hideous horned one exist ? Read the text for knowing ! 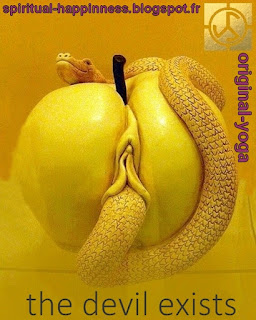 
The good like the evil exist, the day like the night, the cold and the heat, the yin and the yang. Of course, to each his own : what is well, for some, will be badly for others but in Truth the good and the evil exist! Consciences will recognize them, others not, taken in confusion, the concepts and the a priori, the atavism and other reasons, like the silly thing, vanity…anyway: confusion.

But it is not a question, here, of leaning on the good and the evil, that was already made elsewhere, the matter of this text is the devil.

It is impossible to describe, to define God in such a way that everyone understands. The specialists in God, adherents of the religions, will be most inclined to believe to be able to do it easily: they have turnkey concepts, learned definitions that they can repeat by heart and who do not suffer from any discussion. They have evidence of the veracity of these definitions: indisputable books, written for a long time ago.

But in Truth all about God is wrong. He is out of reach for the human brain. One will never insert the ocean in a gourd. All what is possible for us to do is to feel his Grace and to benefit from it with humility and recognition.


The devil is hardly less difficult to say, to explain than God. Did you wonder that this word meant, devil (diable in french)? Here the explanation of wikipedia, recut by all the dictionaries:

'' Le Diable (the devil), in Latin: diabolus, of the Greek diàbolos, resulting from the verb diabàllô, meaning that-which-divides or which-separates or which-destroys is a general proper name personifying the evil spirit, also called Lucifer or Satan in the Bible ''.

Is it extraordinary, not ? The devil is the one which divides! Perhaps you know that the word yoga means the Unit, the Union since the samnyàsin monk ; Adi Shankara, around the eighth century before our era. Before him this word meant freedom or release. I speak, here again, about the true mystical yoga, not about a homonym intended for the psychic and physical wellness. When it is spoken about the mystical yoga, it is about a spiritual way. 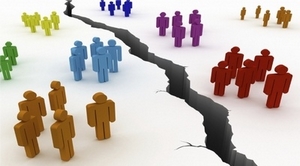 The yoga, of which it is question here, is as deep as a religion, except that unlike a religion it has a living word. Yoga existed well before the first religion. Anyway, it is not about yoga here, but the fact that devil means that-which-separates, which divides speaks extremely to the practitioners of the original-yoga !

By the Observance of Agya, the disciples seek to centre themselves to know the Unit, or yoga. The deepest moment of this possible unit is in one of the three feet of the Agya, the Meditation and in the Meditation, if we come close to the Unit, we know also its opposite, the duality, the confusion. We know also what prevented from unite ourselves, which divides: the thoughts distilled by the false-ego. We will see further that the evil spirit, for a long time ago, was named Ahriman.

He who separates, the devil, is the false-ego

This concept of false-ego is unknown from the majority of people. All the negative attributes of the false-ego are usually allotted to the ego. But the ego does not have anything negative, it is on the contrary a God's Grace who gives to the immaterial soul its identity, its Conscience, making it able, by the incarnation, to say I .

Except on the original-yoga, in the Bhaktimàrga, where it is the most spoken about the false-ego is in the Bhagavad-Gîtà. This book is one of the two great epic poems of India, founder of the Hinduism with the Ramayana. It is in this book that it is question of Krishna. It is spoken there about the false-ego by giving to it the same meaning as on the original-yoga. An extract of this book on this subject:

“If you become conscious of Me, all the obstacles of the conditioned existence,
by My grace you will cross them.
If however, you acted not animated by such a conscience,
but by the false-ego, closing me your ear, you will be lost.”

Extracts from the book of the path:

The lexicon of the path (in french)
gives the following definition of the false-ego: 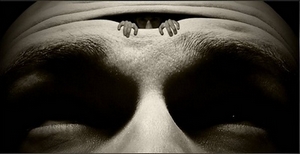 '' False-ego [n.m] or Mâra or Ahamkara: The Bhagavad-Gîtà speaks much about it. It is what certain name the evil. It is the other face of the ego. The false-ego is this inertial force which, mechanically, attaches our Conscience at the surface levels and does all to keep it attached there.

The worldly pleasures, for unique interest, the primary instincts as only references, the obsessed pleasure, the abuses, the hatred, the confusion, the duality, the war, the concepts, the madness, the unconsciousness, the inconsistency are its creations and it hates the peace, the Love and the Holy-Name. It is able to disguise itself in lamb for better misleading the seeker or the devotee. It builds all the possible traps to prevent the soul from arriving at its ultimate goal. Only the Grace can thwart the false-ego.

The false-ego disguises itself
when its “host” likes the spiritual and religious things.
It wears, then, the clothes of the monk, the priest
for better distilling its concepts, its confusion.
It is named then the spiritual-ego.”

In the Manicheism, [the Manicheism is a religion founded by the Persian Mani at the 3rd century. It is a syncretism of the Zoroastrianism, Buddhism and Christianism] the evil is even with the good, one and the other corresponding to God. God would thus be made of these two poles: the good and the evil, as a rotor has two poles, positive and negative, to create electricity while turning.

It would be this bipolarity of the good and the evil which would create the life. Among the hindouists this creation of the life, by a bipolar demiurge, is personified by Brahma, the creator and Shiva, the destructor. One will leave aside Vishnou, the guard, for the moment and an arithmetical cause.

However Shiva is also the good which carries happiness and the “saint patron” of the yogis. The shivaïst tradition of the Hinduism considers it in five great functions: he is the creator, the preservative one, the transformer, the dissimulator and the revealing one. The asian spiritualities are not miserly of these apparent paradoxes.

For the Judeo-Christians, the evil and the good are not equal. One speaks there about fallen angels, their chief etc There are here, for us, some myths but we are in agreement with them on the point of inequality between God and the devil, the good and the evil. On the original-yoga it is a habit to consider the good as infinite and to say that the evil is at an epsilon of the good. If the evil had been a little bit more powerful it would have been equal to the good.

A part is not the whole

Obviously, the false-ego is not the evil, even more the devil. As the human being does not have God in him, it does not have either the devil in him. The human being, like everyone, has some of god inside him, part of Him, and he has also some evil in him. The divine part, the human has got, is indicated by the word Holy-Name… it is the “matter” of the soul, among other things.

The false-ego is in the same way a part of the evil.
Any thing has, in it, its opposite.
If the man has good, inside him, it has also evil.
What is the good ?
It is what brings the soul closer to the Unit…
the evil is what draws aside it,
like the centrifugal and centripetal forces.
When the heart is at the direction of the mind,
the conscience of the individual is high.
When it is not the case,
its conscience is plugged by the nescience,
or absence of revealed Knowledge (Shruti).
It is this absence of the Knowledge
which creates the false-ego.
The false-ego is the absence of Knowledge.

The conscience brings the soul closer to the center, the door of the Kingdom or Satçitananda and the absence of conscience moves away from there. The good is what links, the evil what separates. Did you see? We come back to the etymology of the word devil!

the good and the evil separate are recent 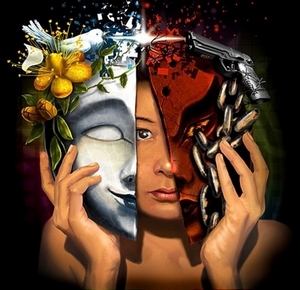 It seems that the concept of good and evil, like two separated things, is recent. In the old worships, more than 5000 years, the good and the evil were both resulting from the same deity, since this one was regarded as containing all what exists. The same deity was thus at the same time able of good and evil.

We are, on this point, fully in agreement: God contains all, therefore the evil too. God does not have a Christian morals and he considers the spiders with the same glance as the kittens. For God the physical death of creature, animal or human, has not the same nature of gravity as for those which remain! And the existence of you and me are not capital.

To return to our Pantheon of the good and the evil, it is not uninteresting, from a purely aesthetic point of view, knowing that Zarathoustra (or Zoroastre, more or less 700 years before our era) reformed the Persian Mazda religion by replacing the existing gods by two entities, one beneficial, Ahura Mazda, god of the light bringing the order, the other Ahriman or Angra Mainyu, chief of the destroying forces. Ahriman was under the orders of Ahura Mazda.

[PS: you will see further why it is spoken, here, about the Mazda religion…]

This interpretation gives to the benevolent god, Ahura Mazda, the role of ultimate judge who lets the demons tempt the humanity and intervenes only as a last resort to prevent the victory of the evil.

Initially Ahura Mazda, supreme God [equivalent with Brahman], creates two spirits which will be opposed, Spenta Mainyu [the spirit of the Good, the Holy Ghost] and Angra Mainyu [the evil spirit]. For us the Holy-Name is this spirit of the good and the False-ego is that of the evil. Both are useful so that the movement, the life is generated.

The evil, in the man, appears.
It is caused by the absence of conscience.
When the conscience of the man is placed at the bad place,
in the duality, the multiple of appearances,
the forces of the false-ego appear.


When it is placed at the good place, in this center where reign the vacuity full with God, thanks to the adapted techniques, the good, the harmony, the Holy-Name appears. It is the guidance.

It is the teaching of the path. If this teaching attracts you, ask here and you will be able to ask all the questions which will come you. It will be answered there with the answers caused by this teaching.