An explanation about these personality traits, the importance of being wary of them as of the plague. The vanity and the hubris are the true ennemies of the spirituality. They are not the self-worth but the fruits of the false-ego, oft the lack of Conscience, of the confusion. 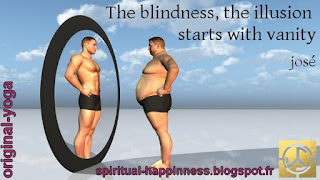 The vanity, the hubris are manifestations of the false-ego. This name is unusual for those who did not read the Bhagavad-Gîtâ and the Bhaktimàrga. Many people call the false-ego by ego. The hubris and the vanity are obstacles between the Conscience and the plenitude.

''Act in the Holy-Name, assume your Dharma you will please to One, so you will be freed from the chains of the vanity '' [Bhaktimàrga 2-3-33]

The etymological dictionaries (for french language) give us the origin of the word vanity (vanité):
“From the latin vanitas, - atis”: state of vacuum, nonreality, vain appearance, lie, fraud, frivolity, lightness. It should be noted that in vanity there is vain, useless. Wikipedia (in french) gives this definition of the hubris (orgueil).

“Orgueil [Latin: superbia]”: is the attribution to its own merits of qualities which one does not have and a very advantageous opinion, generally exaggerated, that one has of his personal value at the expense of the consideration due to others, unlike the pride which does not have any need to be measured with the other nor to lower him. Lack or absence of humility.

The consequences of the false-ego, on the mind, is that it prevents it from living its true nature, its life as it could be, simply and in any Truth. Other consequences are by-products of combined vanity and hubris (orgueil):

The selfishness, the self-centredness, the greed, the desire, the spoliation, the indifference, the cruelty, the desire-Master, the dissatisfaction, the attachment, the jealousy, the injustice, the domination, the psychorigidity, the cupidity, the avarice, the lie, the fraud, the bad faith, the vexation, the humiliation of others, the contempt, the feeling of superiority, the racism, the ostracism, the spinelessness, the hypocrisy, the feeling of failure, the sense of inferiority, the feeling to be humiliated, the dishonour, the blindness, the scandalmongering, the hatred and intolerance. [nonexhaustive list]

The victim of these troubles

It should be noted that the first victim of the hubris and the vanity is the one who they dominate, like hatred and resentment, the desire and the jealousy. The hatred poisons the one who dedicates it. If the human being is close to his animality, without the required hindsight, he becomes the prey of the three guna [as the yogis, the Buddhists and the hindouists say] and the object of his instincts, his desires, his needs and his desires.

It is also important to known that nobody is safe from the Grace and that you should shouldn’t let you misuse by the appearances. Some people which are considered as spiritual, will refuse the Truth under pretext it is not the image of their concepts. Others, which appeare to be thousand miles of any spirituality, will be touched directly.

In a person who does not have hindsight on his/her animality, vanity and hubris take a great place on the reason and contrarieties have serious consequences on his/her mood. Such a person will be prone to the desire to pile up goods and attached to these possessions so much so that a paranoia will invade him/her, at the same time as the fear all of losing. In the event of harmful circumstances, such as bankruptcy, robbery, spoliation, natural disaster, this person will see “all his/her life collapsing ”.

The sincere seeker must absolutely distrust these feelings of overweening pride and vanity which you should not confuse with the self-worth nor the pride [it is when the pride is not justified that it becomes vanity and overweening pride].

Drive back these inclinations

For the Walker (person with the Knowledge of the four techniques) testing a frustration related to his/her hubris, a feeling of irritation, aggressiveness related to this frustration, it is necessary for him/her to go back urgently in his/her center without facing the risk of seeing the confusion and its sufferings to take him/her again.

For the seekers, close the eyes, take a great inspiration, make a great expiry and take the necessary hindsight on these feelings of frustration, vanity, wounded pride which, you know, can lead to aggressiveness with violence, jealousy, scandalmongering and suffering.

Do not accept that the false-ego takes the step and lowers you on a level of Conscience which is a dead end full with sufferings and which you would be thrown in a spiral of failure. Don’t let you carry by the vanity, the hubris. Be wary of it as of the plague and each time you see yourselves reacting while following the inspiration of these bad advisors, have hindsight. While waiting to be able to put your Conscience back to the good place by the knowledge of the appropriate techniques.